Amidst the global economic downturn of recent years, the seven countries of South Asia, driven by India’s steady economic growth, are performing remarkably well economically. This has attracted attention from global enterprises, including Taiwanese companies.

South Asia is made up of seven countries. These countries include in order of population, India, Pakistan, Bangladesh, Nepal, Sri Lanka, Bhutan, and Maldives. The region encompasses a large land area of 4.48 million km2. Among these countries, Maldives is the smallest by land area, and has a population of only 340,000 people. Given Maldives limited domestic market, this section of the “South Bound Service Guide” only covers the other six countries in South Asia. According to statistics released by the IMF, the population of the six countries totals 1.68 billion, and accounts for 23% of the global population. India boasts a population of nearly 1.3 billion, making it the second-most populous country in the world. Meanwhile, Pakistan and Bangladesh have populations of 180 million and 150 million, respectively. The significant size of South Asia’s overall population has brought many benefits to the region. 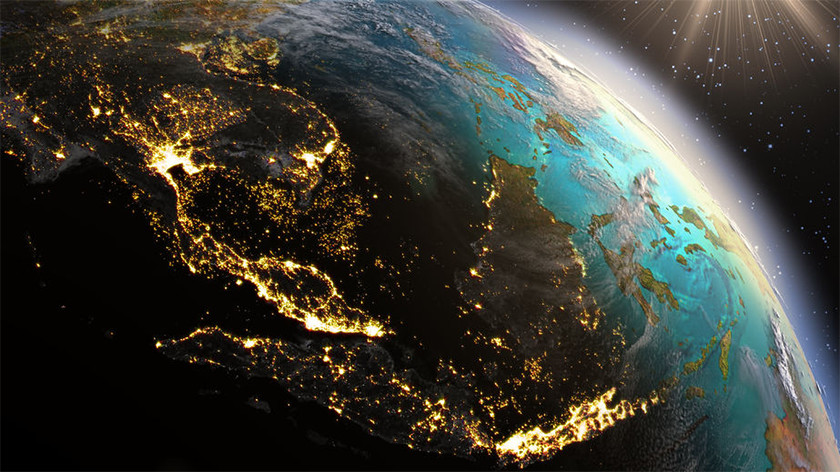 Despite South Asia’s huge population and vast land area, the region has predominately been influenced by India in terms food, languages, cultures and traditions. Three major religions, namely Hinduism, Islam and Buddhism, play particularly influential roles in the region. Hinduism is mainly worshipped in India and Nepal, Islam is prevalent in Pakistan, Bangladesh and some parts of India, and Buddhism has a strong presence in Sri Lanka and Bhutan. The region also practices a number of similar traditions, for example, many people use their right hand to eat, and use a head-shaking gesture to express “I agree” or “Yes”.

Furthermore, a spirit of mutual-respect and inclusiveness in terms of religion and culture throughout the region has led to relative political and economic stability. It is therefore increasingly important for businesses interested in exploring markets in South Asia to not only know about South Asian culture, but also understand the key doctrines and principles of the aforementioned three religions.

SAARC: a step towards tariff-free area

The South Asian Association for Regional Cooperation (SAARC) is the regional cooperation union in the region. The South Asian Association Free Trade Area (SAFTA) agreement was signed on January 6, 2004 during the Twelfth SAARC Summit held in Islamabad, Pakistan. Foreign Ministers involved in SAARC proposed the goal of achieving tariff-free trade for all goods in the region. Afghanistan subsequently joined the SAFTA agreement in November 2005, making it the eighth member of the agreement. SAFTA entered into force in January 2006. Given the frequent exchanges of people and trade, the SAFTA agreement has proved to be beneficial in terms of promoting greater flow of goods in the region, which in turn has led to economic and trade growth for countries involved.

The SAFTA agreement provides a phased tariff liberalization schedule. Member states reduced their existing tariffs by 20% in the first phase of the agreement, which ended in 2007. In the second phase of the agreement, completed in 2012, SAFTA Members subsequently implemented a 20% annual tariff reduction with a goal of achieving a zero-tariff target by 2015. The least developed nations of SAFTA, Bangladesh, Bhutan and Nepal, have three additional years to reduce tariffs to zero. India and Pakistan have yet to fully accept the terms of the SAFTA agreement, despite the fact that these two countries have signed the agreement. In addition to elimination of tariffs on trade in goods, frequent exchange of people is also taking place among SAARC members. In fact, many SAARC states have granted each other favorable visa-free or visa-on-arrival treatments.

Bhutan and Nepal are landlocked countries without sea ports in their territories, which makes it inconvenient to transport goods to and from these two countries. In view of this, India and Bangladesh have worked closely with Bhutan and Nepal and signed sea and land transit agreements, as part of efforts to facilitate movement in transit of goods through Kolkata in India or Chittagong in Bangladesh to and from Bhutan and Nepal. The streamlined border inspection mechanisms among them haves also helped to promote the free flow of goods.

South Asian nations are in need of developing public infrastructure and have mounted a big push to bolster foreign direct investment (FDI) in the region. Such FDI brings investments and capital to the region. Equally important are the new skills, such as production and managerial expertise that FDI has brought to these countries. Such skills act as key elements to advance standards in many industrial sectors, and therefore lead to growth throughout the whole supply chain. This also helps to prevent South Asian countries from becoming labor-intensive OEM-based economies. Countries across the region have set up processing or free trade zones, allow for 100% foreign ownership, and have tax exemption periods between five and ten years. This has made South Asia a popular investment destination for Japanese and Korean enterprises.

South Asian countries, with a combined population of 1.6 billion, have acted as an abundant supply of low-cost labor. The diversified markets in South Asia, such as Bangladesh’s low-wage employment and India’s demographic dividend, possess many advantages. This presents a great opportunity for investors in South Asia to lower their production costs locally, as well as expand their markets to other parts of the region. The niche advantages of markets in South Asia have made them worthy of consideration by Taiwanese manufacturers. It is suggested that Taiwanese enterprises should rethink their investment strategies based on such advantages.

Public infrastructure in South Asia needs to be improved, which is manifested by serious power shortages faced by many countries in the region. Governments in South Asian nations have not only encouraged investors, domestic and abroad, to invest in public infrastructure, including power plants, but also sought financial assistance from the World Bank and the Asian Development Bank to build new infrastructure, and improve local conditions. This has generated many government procurement opportunities, with many of them open to the international community. Taiwanese enterprises would therefore be well advised to take advantage of such opportunities.